Lets get Bizzy in the Kitchen!
Weight Watchers 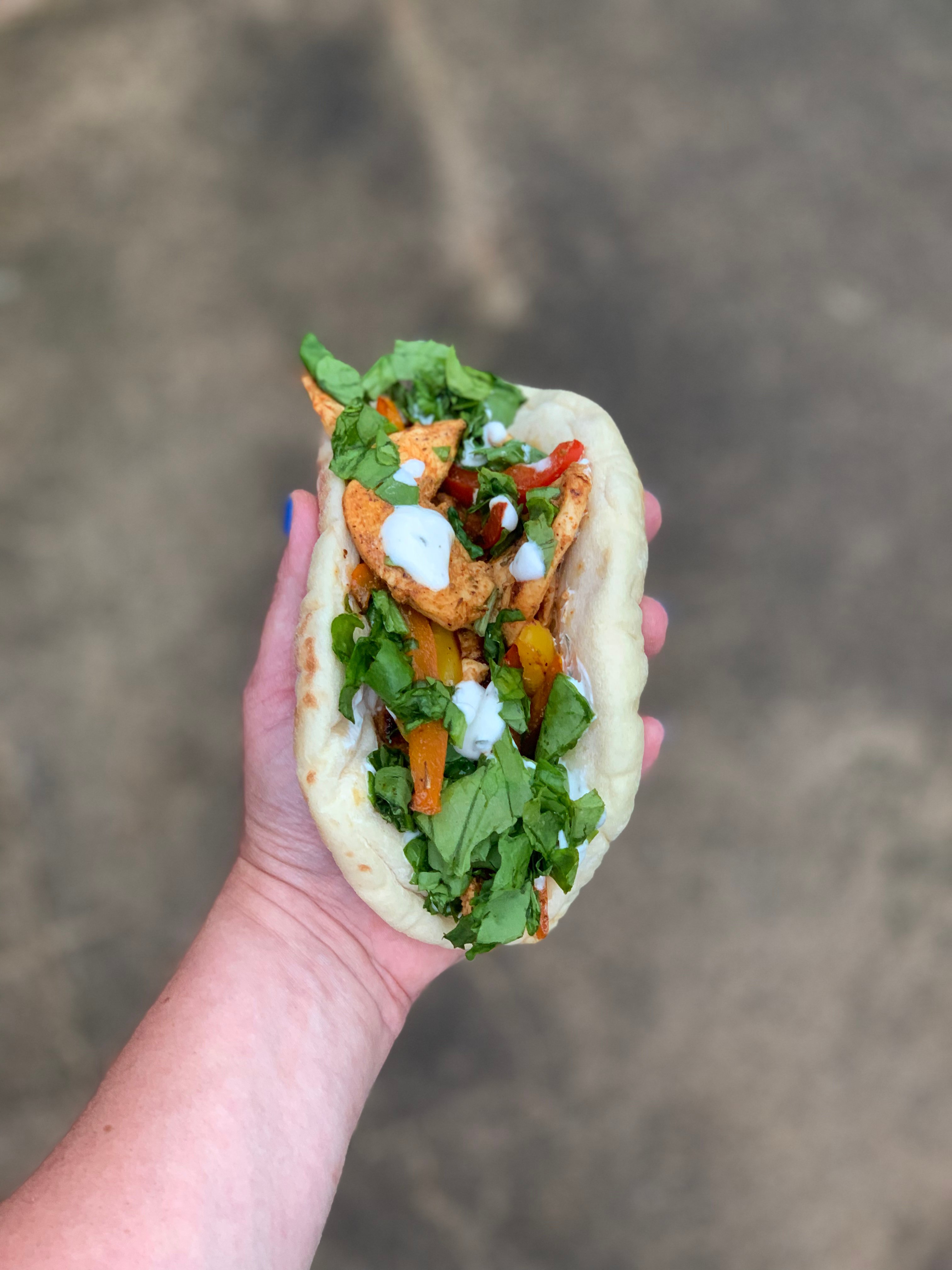 I had the best afternoon yesterday!   My friends Erica, Dan and I got a behind the scenes at Naf Naf Grill, a fast casual restaurant chain in the Midwest.  Right now they have four locations in Chicago and I think 17 locations in the suburbs.

Meet Chef Pat!  He’s the Executive Chef at Naf Naf Grill.  He is so nice – last month we learned how to make falafel, and I was so looking forward to this month’s topic, which was PITA BREAD!  #swoon 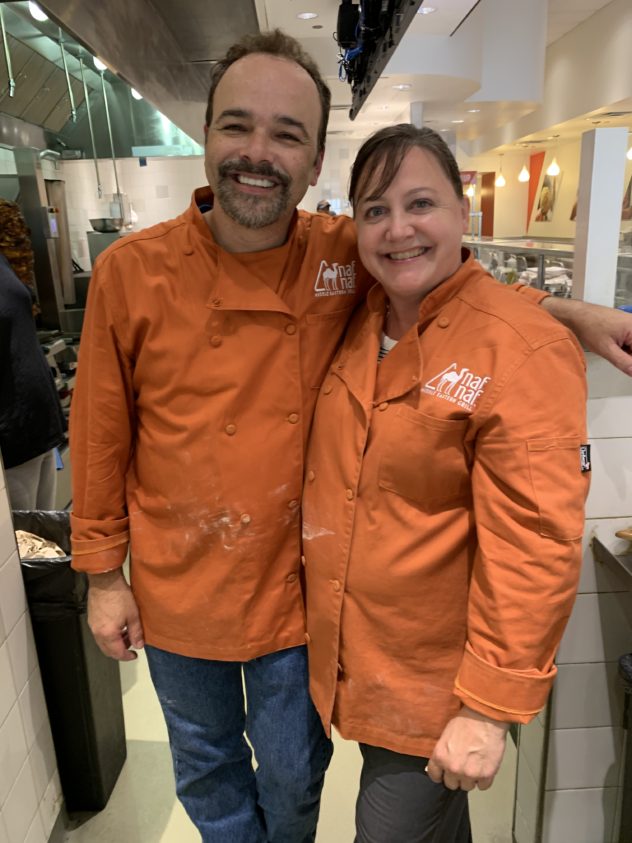 I am so impressed with Naf Naf – everything is made in house, at every location – from the falafel, to the chicken shwarma, to the pita.  Every.single.day.

The dough is just simple ingredients, flour, salt, water, a bit of sugar, baking soda.  It gets mixed in a giant mixer, then brought to a big table where the giant ball is kneaded until smooth.  Then it’s put in that giant pan, where it’s pressed down for about five minutes before heading to the divider – coolest piece of equipment!

The pan of dough gets put under the divider, and my Chicago boyfriend, Dan, used his muscles to divide the dough – just a big lever that gets pulled down, but it does take some elbow grease. 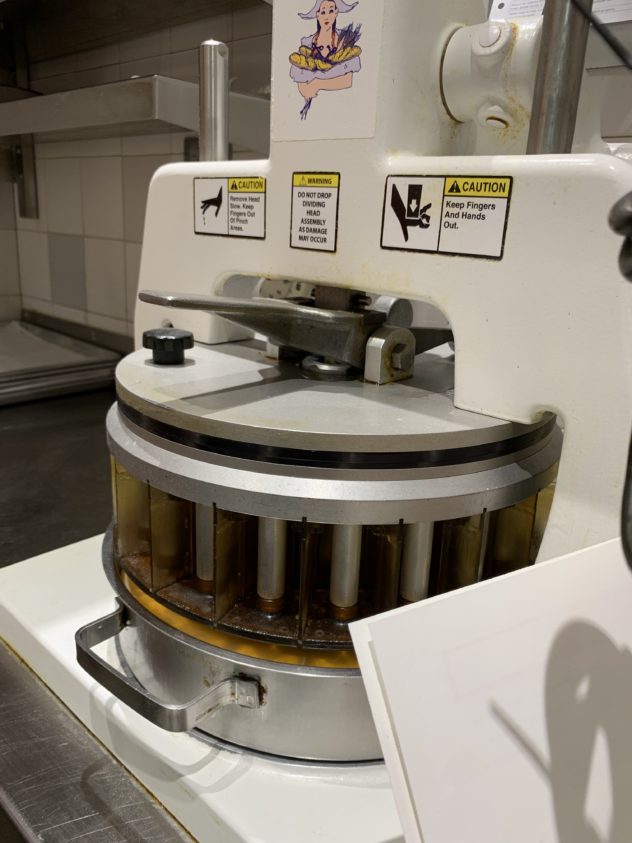 Then the dough comes out like that!  How cool!  It gets put back on the table, and each ball is rolled into a circle, then goes on the sheet tray into a proofer, which has nothing but a bit of warm water in it, for 25 minutes.

Then it’s taken out, each pita gets put in the “shredder” that flattens it out into the pita shape, then proofed for an additional 30 minutes before being cooked.  I don’t know why I had it in my head that the dough would be rising for like 24 hours?! 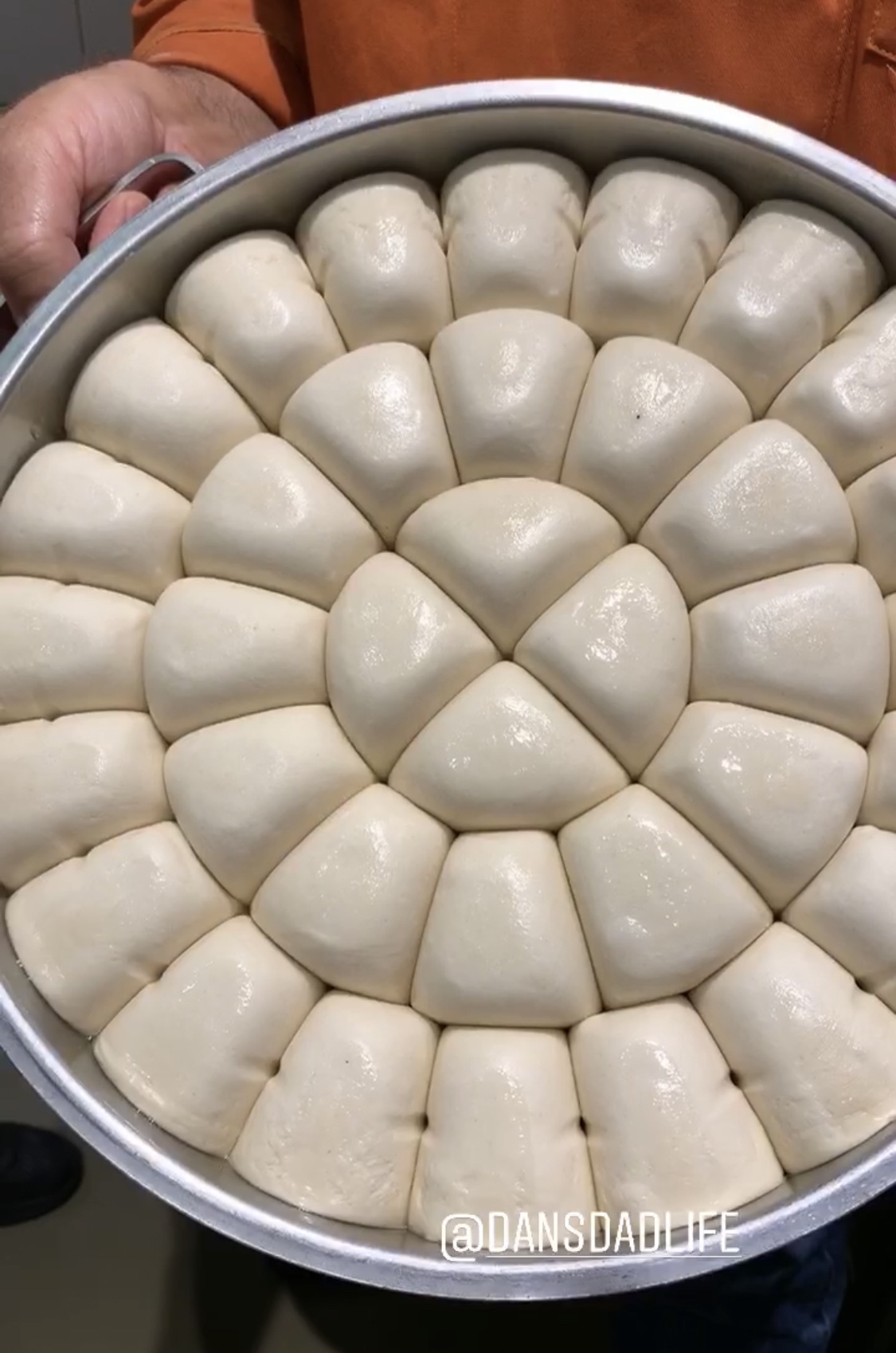 You guys – this dough is gorgeous – so light, fluffy, I really really wanted to eat some of the raw dough.  But I was good and waited the 70 seconds it took to cook these pita.  Oh, I did have to wait for them to cool – darnit! 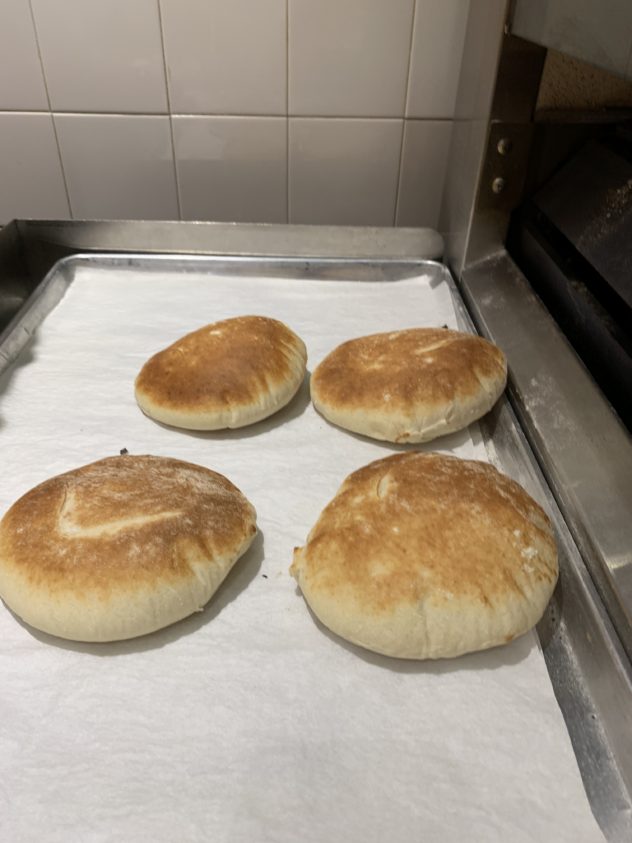 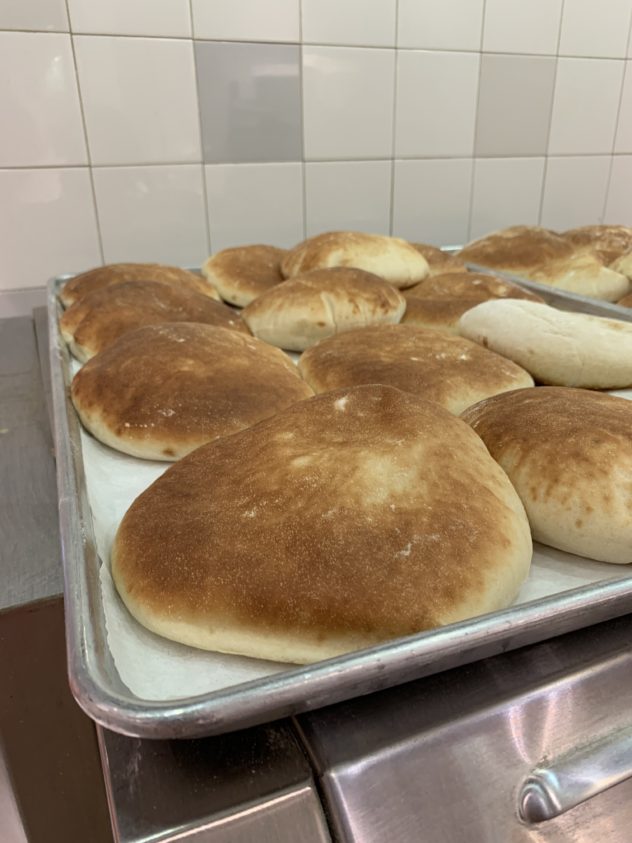 I was lucky to be sent home with a dozen pita breads – how lucky am I?  But guess what?  They sell the pita bread in each of their stores in packs of 5-6, I can’t remember, so you can grab and go and make a quick dinner like I did last night.

If you take the Metra in Chicago at Olgalvie, Naf Naf is just half a block south on Clinton – easy to stop by on your way home from work.  Just sayin’ 😀

This dinner could not be easier!  It was ready in 12 minutes – I know that because I did a video on YouTube, which is so bad, it’s good – I’ll put the link down at the bottom – you’re welcome.

Mix the chicken and the blackened seasoning, and set aside.

While the chicken and peppers are cooking, mix the greek yogurt and the ranch dressing mix together.

Put pita on plate, spoon some of the ranch on the bottom, top with the chicken and peppers, add the baby spinach and a touch more ranch dressing.

The only points in the recipe is the pita bread, which is 6 points and totally worth it! 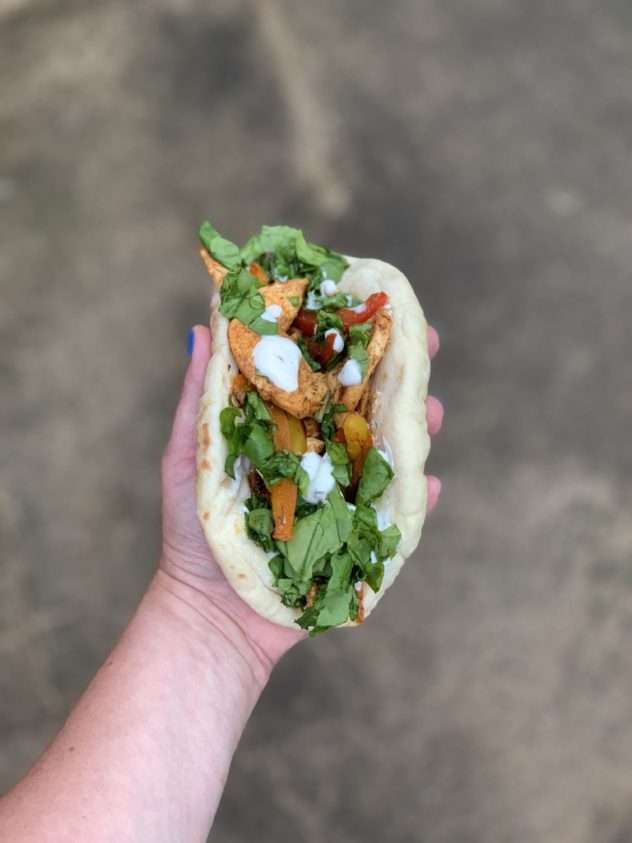 My daughter-in-law Liz has an awesome YouTube Channel – with cool graphics, voiceovers – you can check it out here.

I’ve been wanting to do YouTube videos since January, but kept putting it off because I don’t know what the hell I am doing.  Like at all.  I was researching how to make cool thumbnails so my YouTube wall looks cool as shit, or how to edit videos, etc.

I’ve come to the conclusion that I most likely will never learn that, and that’s okay.  My videos will be jenky AF, but I hope they inspire you to get in the kitchen and make simple, delicious food.  Promise next time I’ll have it set up so you can actually see me cook – ha!

This thumbnail that posted kills me, but I will never change it.  I also have part of my instagram story at the end of the video, and I don’t know how that happened, but again, I will never fix it.  Life isn’t perfect, so why should my videos be?!

Yep, that’s me with raw chicken in my hands. 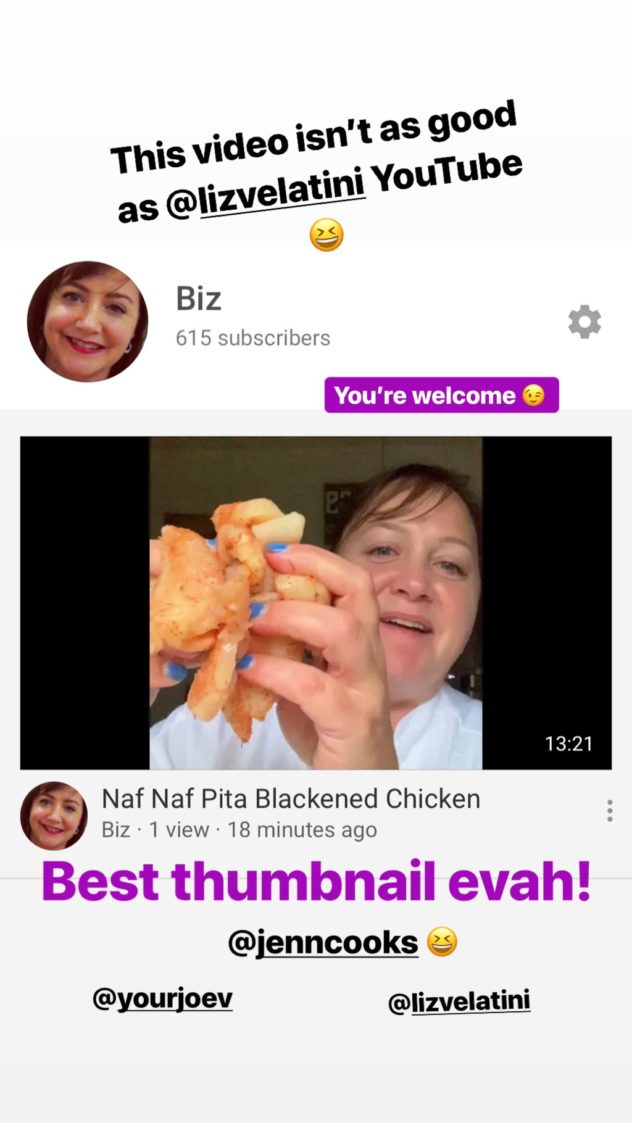 You can find the video here.  Please feel free to subscribe, and give it a thumbs up.  See look at that, I am already a professional YouTuber just by saying those words!

Happy Thursday friends – make it a great day and don’t eat like an asshole. 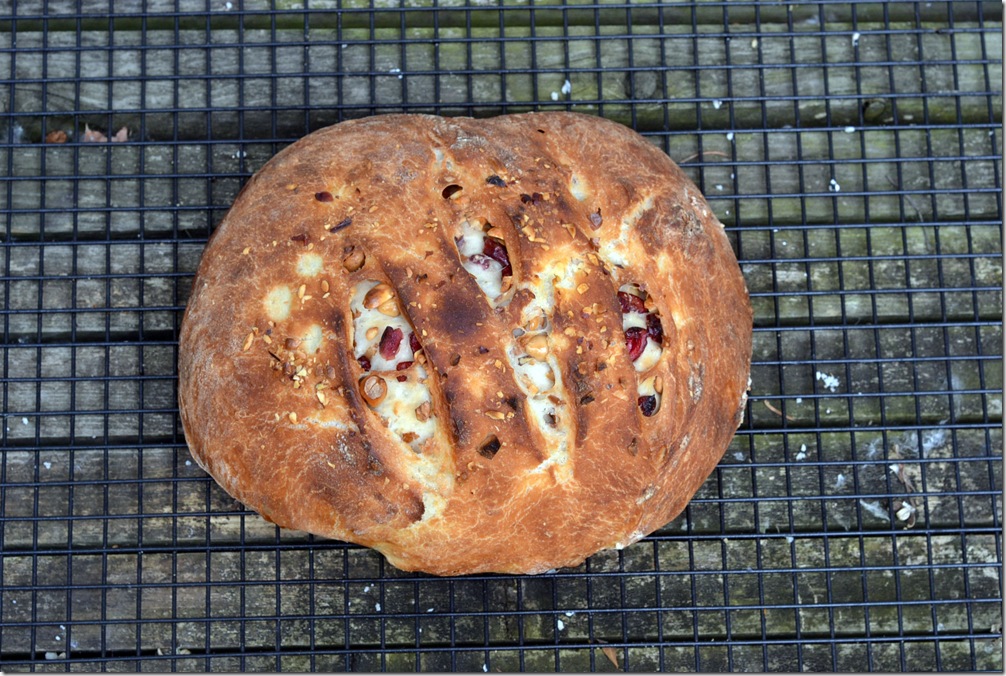 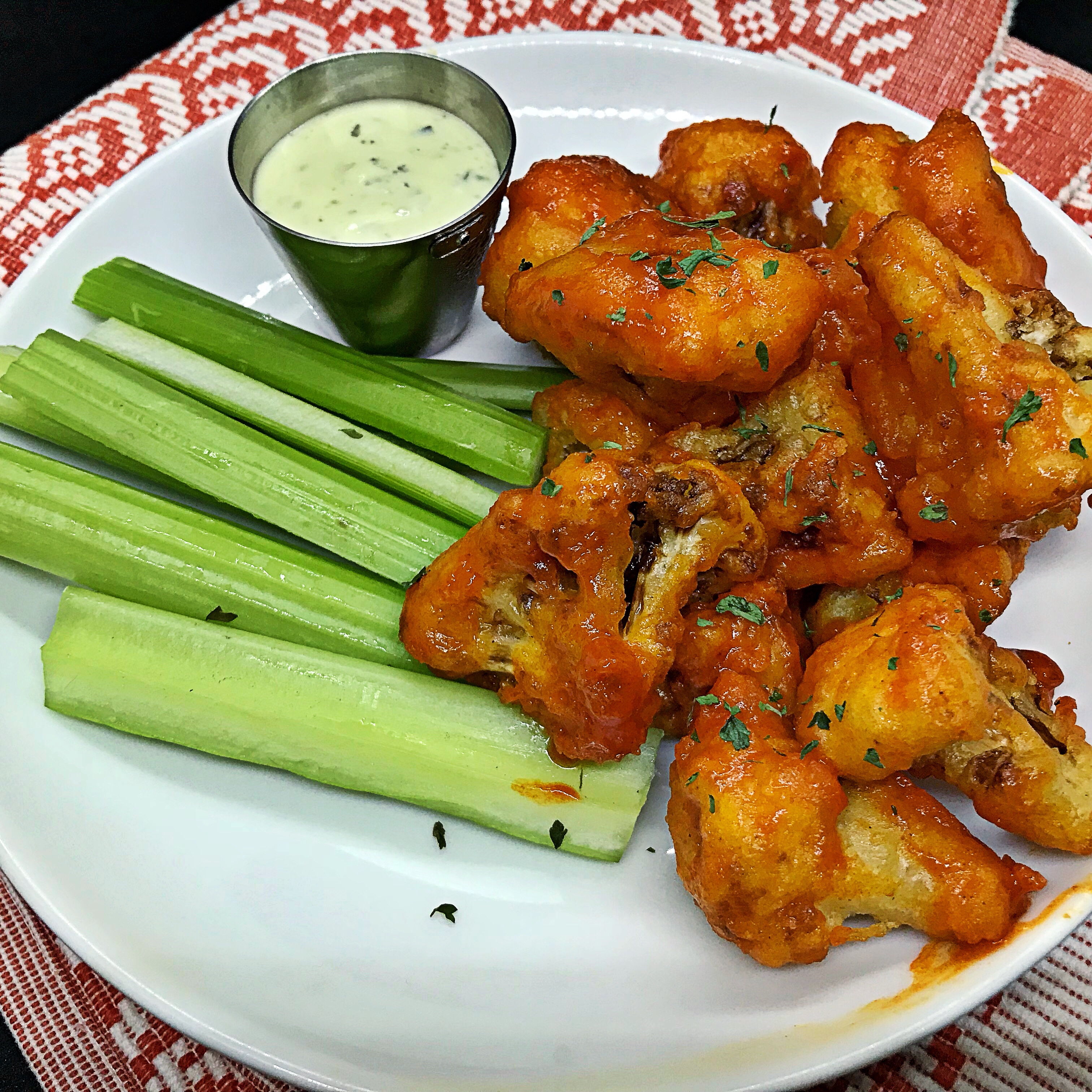 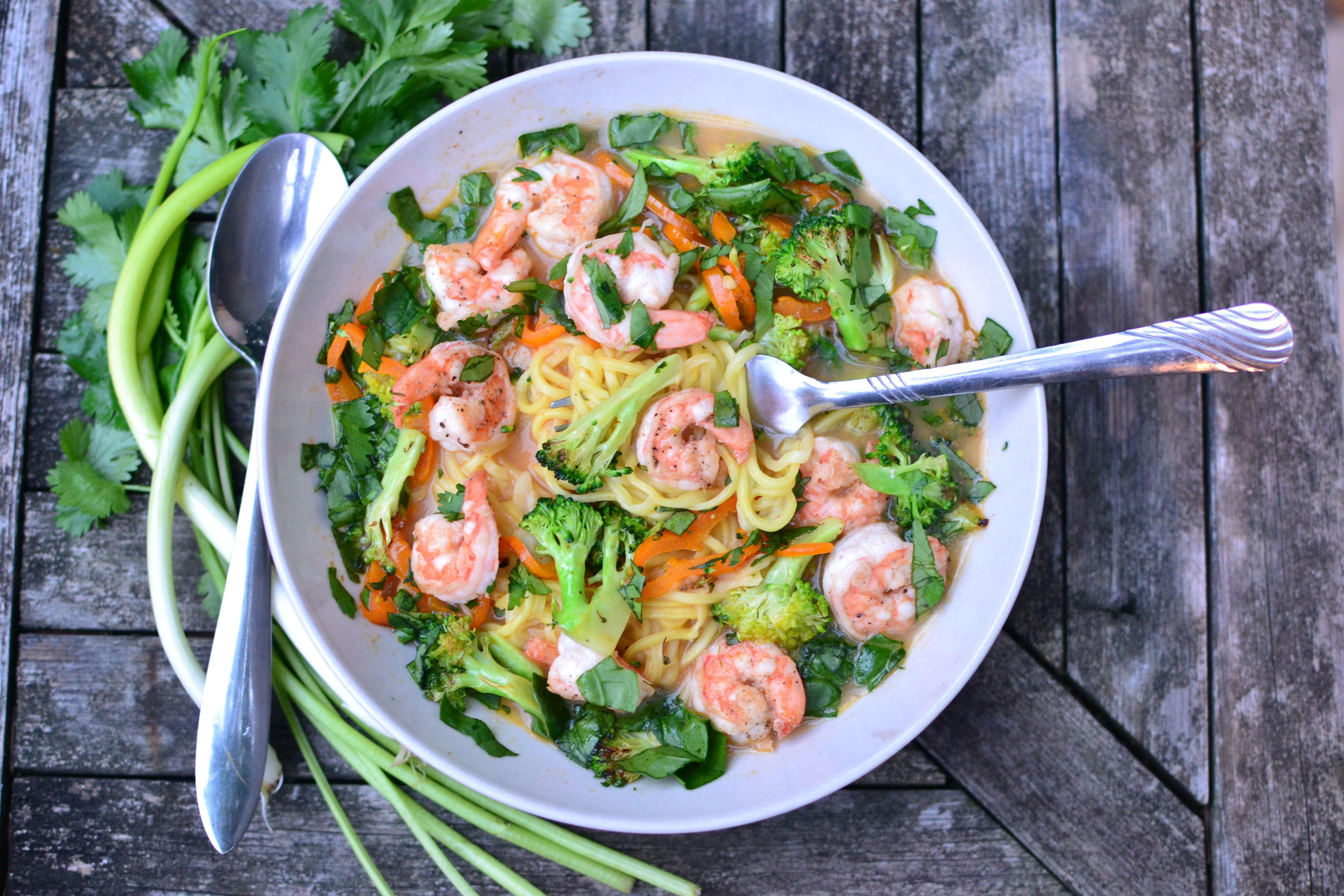