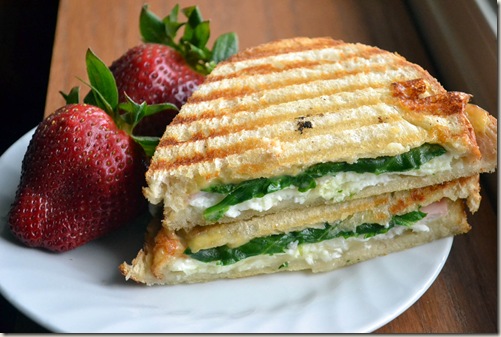 I think this may be my new favorite breakfast.  I stopped at Panera on my way to work and bought a loaf of sourdough bread (Mel, I will make that starter one day!) and had them slice it thin.  Each slice is 1 ounce.  I had an egg white, spinach, ham and cheese panini with strawberries on the side.  I use I Can’t Believe It’s Not Butter to butter the bread – each tablespoon is only 5 calories, but has that buttery flavor.

While not as bad as predicted, we did get about 7 inches of snow yesterday.  Around noon the winds starting howling, snow was blowing sideways, it was at a temperature that it was icy and snowy.   Road conditions were getting worse, and our office manager let us leave around 1:00.  What is normally a 35 minute drive home, took my 95 minutes, but I actually enjoyed the time.

See, I am that person singing at the top of their lungs next to you at a stop light!  So I jammed to tunes all the way home.  Around 4:00 Tony and I decided to get the snow blower out for the first time this year!  It had cobwebs all over it.  We have an electric snow blower and next to our riding mower, one of the smartest choices we could have made.  Just plug it in and you are good to go.

Now here is how it goes down.  Much like mowing the lawn (which Tony hates when I do it – in 13 years I think I’ve only mowed the lawn 5 times), Tony has a set pattern on how he thinks it should be plowed.  There is no method to my madness, I just barrel down and try to get as much snow as I can at once.

I do admit though, that once Tony told me to only snow blow half the amount of snow that I was, it did make it easier.  But I still don’t think he likes the way I blow.

I never ended up eating lunch.  Usually I make lunch for my boss, go to the gym, then fix my lunch.  But when the office closed, I just packed up my shit and left.  Although I will make the panini again that I made for boss – roast beef, goat cheese and chopped pickled asparagus – she said it was a winning combination!

I ended up marinating flank steak for dinner.  If it didn’t look like summer outside, at least I could indoor grill and make it smell like summer.  While this meat is not on the cheap side – $7 a pound, Tony and I split one portion for dinner, so that’s $1.75 per person serving, the other half will be used for tacos later in the week.

For this thickness of meat, I simply cooked it for 3 minutes a side – perfect medium rare.  I used this marinade and Tony loved the flavors.  It only marinated for two hours, but you could easily marinate it overnight.

Thanks for all the tips about iTunes in yesterdays post – I think I found out what the problem was – I had an old version of iTunes on our computer.  When I hooked up to charge my phone last night, it said it couldn’t sync up because the version was old.  I’ll update it tonight and hopefully that will fix it.

Another thing I love about my iPhone?  FACETALK!  I was in the kitchen when my step-son texted me “are you home?”  You see my parents in law are in Austin Texas visiting my step-son and his wife.  It was nice to talk to them and see them at the same time – like a mini skype!

My step-son later sent this picture.  It’s my MIL with my step-sons dog Cinnamon.  She looks so relaxed – love it! Have a safe trip home!

Alright, time to scrape the snow off my car and get ready for work.  We probably got another inch after we plowed yesterday.

Make it a great day! 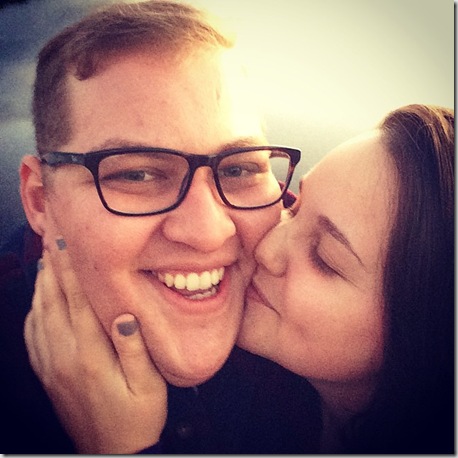 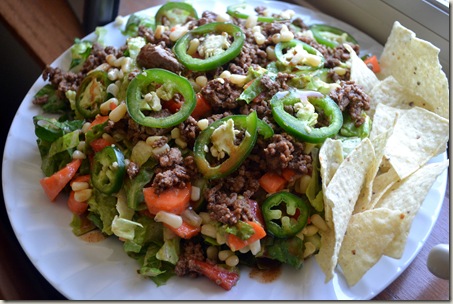 No Sushi for You! 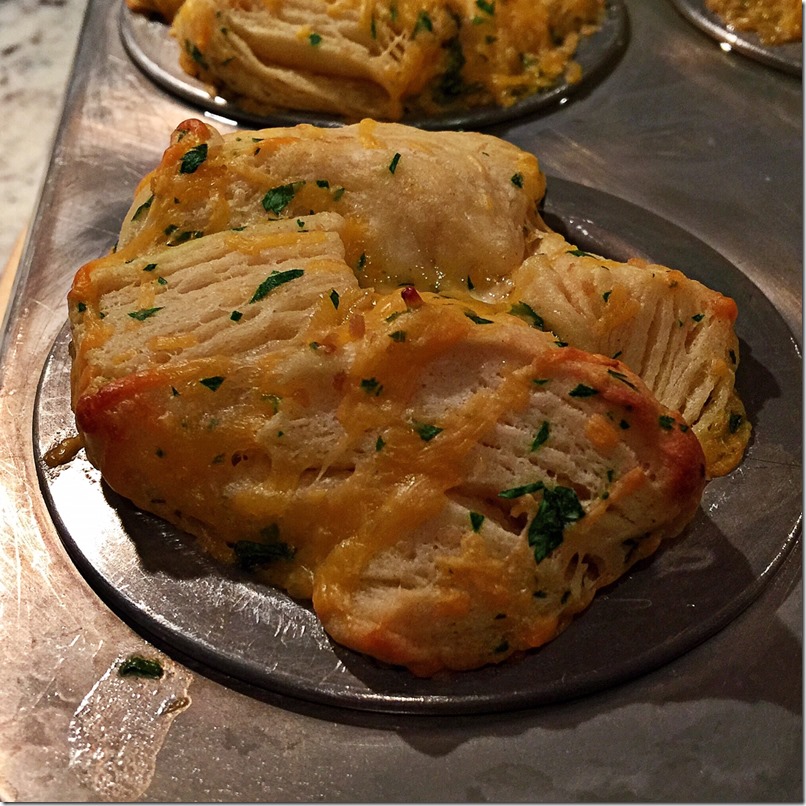