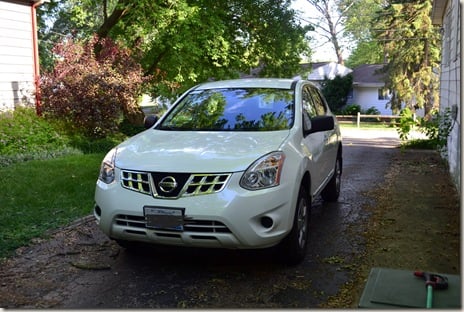 Yep, our car of nearly 12 years has officially died.  Turns out it needs a whole new transmission, but with 145,000 miles on it, it’s not worth getting it fixed.  Tony is going to be checking out some cars for me – luckily we have the car rental for a full week so we don’t have to rush into anything.

I just didn’t expect to buy two new cars within weeks of each other!  Such is life, right?

The first rental car I got had the check engine light on, so I traded it in on my way to work.  The switch was seamless, and to apologize they upgraded my car so this week I am driving the Nissan Rogue.  It’s nice – its like a car/SUV.

Alright you guys – I flew to close to the sun on this parfait combination.  I was out of my homemade granola, but I had some Kellogg’s vanilla cherry yogurt in our kitchen cabinet at work.  My yogurt flavor?  Passion Fruit+kiwi+apple+cherry+vanilla=tastes like ass.  Way too many flavors going on here – I need to remember “keep it simple stupid.”

I had to work right through lunch.  We had a document that needed to be filed and I’d much rather work through lunch than have to stay late.  We finished it at ten minutes to five!  The day flew by.  Lunch was leftover Chinese from the weekend – on the bottom you can’t see is 3/4 cup pork fried rice with 3/4 of a cup of beef and broccoli – I kicked it up with some sriracha.

Yep – more Mexican!  Although when I downloaded my pictures I thought “I probably could have added a vegetable on the side.”  Not sure iceburg lettuce constitutes a vegetable.

OMG, I made the best granola last night.  I will post my recipe tomorrow, but I have Nicole’s granola recipe as my inspiration.  I finally got the clumps of granola I have been trying to create!  You will have to stop by tomorrow for the recipe.  The best part?  I made it with sugar free pancake syrup, only 1/3 cup of brown sugar for the whole recipe and light coconut milk!

Tony was watching an episode of Real Sports with Bryant Gumble.  Matt Long was a firefighter that was working the day of 9/11 in New York.  After seeing so many of his friends die, he vowed to stay as healthy as possible and became a pretty accomplished triathlete.  Until he was run over by a bus.  The bus literally had him pinned underneath, and the hit was so forceful, his bicycle seat actually impaled him up to his intestines.

His pelvis was separated from his skeleton, they gave him a 1% chance of even living, and had to replace the blood in his body 4 times before they were able to control the bleeding.  His one leg is now 1 inches shorter than the other.

But 40 surgeries later, he ended up doing the Ironman Triathlon and actually came in 2 minutes before the required deadline of 17 hours.  That’s a 2 1/4 mile swim, 112 mile bike ride and a marathon.  How is that for some inspiration?

I couldn’t find the full video – but here is a snippet of that video – make it a great day!  If you google Matt Long triathlete on you tube, you can find some inspirational videos, as he is now a motivational speaker.  You can read more about him here – he’s also written a book.